How to use Street Theatre to Raise Awareness of Human Trafficking 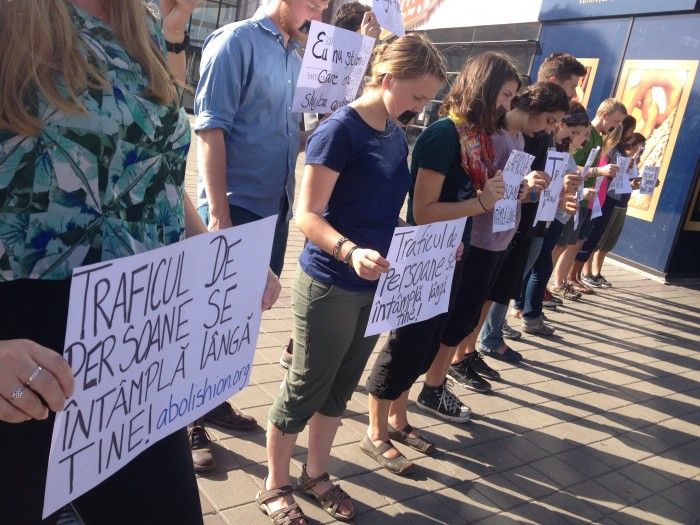 The guys at Concordia University successfully raised awareness of human trafficking using street theater. If you would like to give it a go, they've worked hard to put together instructions on how to do the skits they designed. Why not give it a go?

Skit One: Taken
Goal: To raise awareness about sex trafficking. To show that trafficking happens anywhere and that often times we don't recognize it. It can look like a charming boyfriend or an amazing job and as a result we often don't see that until it's too late.
People: 10-20 5 pairs of male/female representing the trafficker and the victim (men wearing black jackets with hoods and women wearing normal clothes) 8-10 people in the crowd as sign holders
Materials: Signs for male/female pairs that read:
Female: I thought he loved me.
Male: It was just business.
Female: I thought he was perfect.
Male: I can use her.
Female: He was the man of my dreams.
Male: I wanted to make money.
Female: I wanted to travel.
Male: I make sure she never knows where she is.
Female: I just wanted a job.
Male: She didn't know what the real job was.
Signs for actors in the crowd that read: Trafficking happens here Black jackets with hoods for men representing traffickers Flowers Passports or maps Duct tape
The scene: is meant to be done in a crowded public square but can be translated into any setting. It begins flash mob style with all the actors simply blending with the crowd. The women playing the victims will begin holding hands in the center of the area and looking down. After 5 seconds they disperse into the crowd. This will draw attention and make people realize something is about to happen. The trafficker/victim signs are previously set on the ground and used as position markers so that the "trafficker" knows where to end. The "Trafficking happens here" signs are tucked into the jackets of the other actors who are dispersed in the crowd.
Action: The girls are sitting around talking or texting when a man approaches. He either woos her with love (represented by giving her a flower), money, a passport, or a map by approaching her and begins to move with her towards pre-set stage area. As they get closer to the area he grabs her and becomes violent. She tries to escape but she cannot. [Note: those given flowers are lured away by the "loverboys" while the ones shown a passport or a map are trying to get it from the man who is holding it just out of their reach. However, each will end with the woman being grabbed and forcibly taken to the mark.] He leads her to where there are pre-set signs on the ground. Once there, he puts duct tape over her mouth and she picks up the sign off the ground. (See materials section for sign details). She stands there looking at the ground. After she has completed this action, the boy (who should be wearing a black jacket) puts up his hood and then picks up a sign. (See materials list for sign instructions). He then places his hand on her shoulder or the back of her neck in a very forceful manor and stands there blankly looking out at the crowd. Once each pair has completed this action, actors standing in the crowd that have then gathered hold up signs that say "Trafficking happens here." [End Scene]

Skit Two: Silence
Goal: To raise awareness about sex trafficking. To show that girls or women who are trafficked are often unseen and silently oppressed.
People: 10- 20 women
Materials: Duct tape Signs that say "Trafficking happens here" Scene: In a public area with lots of foot traffic. Action: Females are wearing dirty clothes, have duct tape on their mouths, and messy hair. They are barefoot, and are either standing or kneeling on the ground holding signs that say: Trafficking happens here. [End Scene]

Skit Three: The Masses
Goal: To bring light to issues of both labor and sex slavery. To show that several people are affected by this trade, both men and women, and we often don't hear or see them even though they are all around us.
People: 20+ both men and women
Materials: Duct tape Signs that say "Trafficking happens here," "I thought it would be a good job," "I thought this meant helping my family," "I thought he was a nice guy," "I thought he loved me."
Scene: In a public area with lots of foot traffic.
Action: One by one, each person takes their place in the public square holding their sign. They should be relatively spread apart but in the same general area. The will have the duct tape on their mouths and will be looking down. After any given period of time, signal for them to form a line facing the most crowded area. They will all stand there holding their signs, looking down. [End Scene]

Thanks to Kristen Maxwell, Maddie Upchurch, Sarah Taylor, Gianna Kozel, Joanna Steinhaus, Lydia Preuss, Rachel Blair and the rest of the Concordia University Around the World team for putting this together.