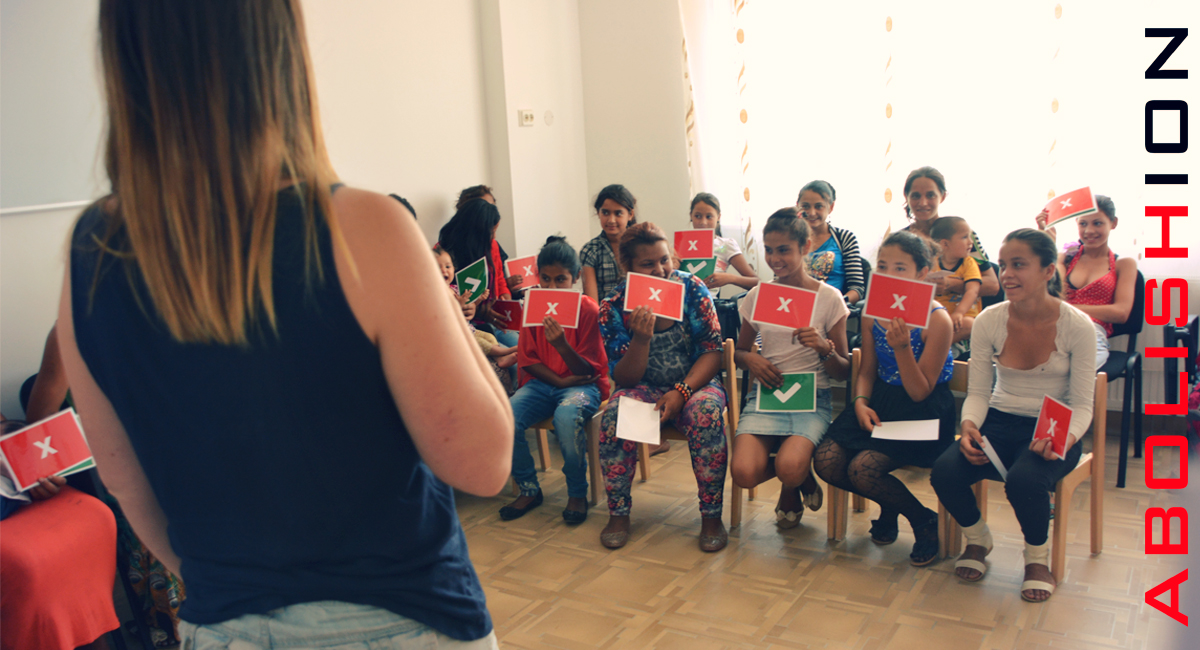 "Is this valuable?" Leanne asked, holding up a 100 Lei note.

Several women nodded their heads yes. Leanne crumpled the note in her hands. Then she dropped it on the floor and stomped on it. She had their full attention.

"Has the value changed?"

In July, the Abolishion team had the opportunity to go to a Roma community and share about the problem of human trafficking. Although our discussion focused mainly on sexual exploitation, the Roma people are exploited through other forms of trafficking as well, including: forced labor, organ trafficking, domestic servitude, and forced marriage.

In an attempt to better understand the people we would be speaking to, I did a bit of reading prior to our excursion about Roma culture. I found that generally, they are very traditional people. They highly value the concept of family, often living together in multigenerational homes with the men being the heads of each household. The women often wear bright, sometimes gaudy clothing. Groups of Roma people can be found all over Europe and in the United States as well, so it is difficult to define Roma culture in distinct terms. The geographical barriers that have isolated these groups have led to slight differences in language and culture over time, but some major things remain in place. Based on linguistics and cultural similarities, it is believed that the Roma people originally migrated to Europe from the region that is now northern India roughly 1000 years ago. Many traditions and expectations remain the same from Roma population to Roma population, which points to how deeply committed they are to preserving their culture and way of life.

The Roma people, also referred to by the slang term “Gypsies,” meaning “thief” are the largest ethnic minority in the European Union. Collectively, they are a very vulnerable group, subject to racial and gender discrimination, as well as poverty and social exclusion.[1] I witnessed this marginalization quite a bit during my time in Europe this summer. The Roma people are looked upon as dirty, untrustworthy, and unwanted by many. Some EU countries have even developed policies which supposedly combat the trafficking of the Roma, but ultimately only target them more. France and Denmark are known for deporting Roma people who are not French or Dutch citizens, respectively. Since it has been reported that roughly 95% of Roma people stay sedentary (despite the perception that they are an inherently migratory people), those who do choose to move are often seeking a better life. Deporting and repatriating them without offering further assistance only makes them more vulnerable.[2]

A study done in 2011 by the European Roma Rights Centre (ERRC) concluded that "there is no unique Roma vulnerability factor’, and no indication that trafficking is a 'cultural practice' of Roma... Roma are highly vulnerable to trafficking due to structural forms of... discrimination, poverty and social exclusion which result in low educational achievement, high levels of unemployment, usury, growing up in state care, domestic violence... and substance abuse."[3] In other words, their risk of being trafficked is not a result of their ethnic or cultural background, but rather a product of their lack of available resources and social status in the societies they are a part of.

As we talked to the women of the community we entered into, I began to realize that I had collected some prejudice of my own. My expectations of the group were completely wrong. While their difference from me was sometimes extremely noticeable, like the fact that they could not read or that girls younger than myself were already married with one or more children, I found that our differences were not as grand as I had anticipated. These are just normal people, I remember thinking. Marginalized, yes. Culturally different, yes. Excluded from society, yes, but their value was the same as mine.

Many Roma people have been metaphorically crumpled by the societies that surround them. Because of this, they are at a higher risk than the average person of being exploited through human trafficking. However, as Leanne reminded all of the women who gathered that day to hear us talk about sexual exploitation, "You are valuable. Even if people crumple you up and stomp on you, you are valuable."