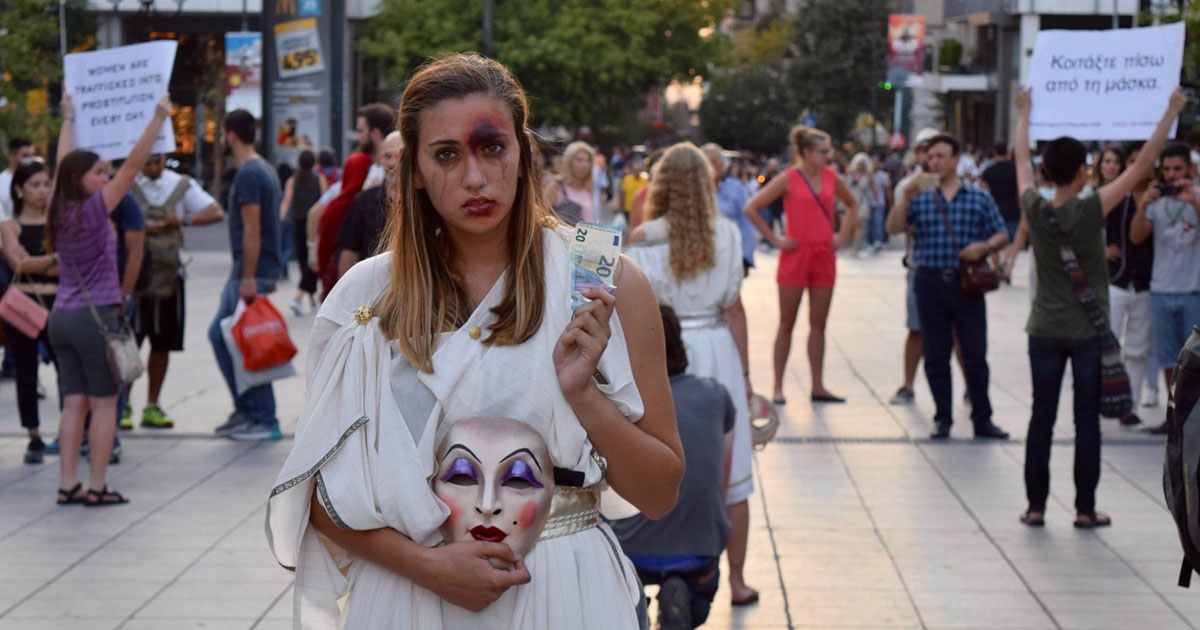 In September the Abolishion team joined with Concordia University to bring awareness of human trafficking to Athens, Greece through the medium of street theatre.  Abolishion spent 10 days in Greece with Concordia's Around The World team, team of 39 students and professors.  Our objective was to create a street theatre performance that would communicate the realities of human trafficking, commonly overlooked in this tourist destination.  "Many people assume that prostitutes choose to be working in that field.  This is not the case.  A large percentage of people who are working in this field are being forced and have been trafficked.  We hope this drama helps people to see that." said Abolishion's CEO, Leanne Rhodes.

The drama, created by Professor Tony Vezner, involved women in full roman dress wearing masks, dancing about. They were then joined by men who were dancing alongside them treating them like sex objects.  The mean offered the women money and at that moment the women removed their masks to show bruises and beaten faces.  At this point signs were held up saying, "Look past the mask.  Human trafficking happens all around you."

The reaction of the crowd at this critical moment in the drama was one of shock.  One moment people had been clapping along and cheering and in the next moment they were faced with the reality of human trafficking.  The smiles turned to shock and for some even to tears as they were confronted with this message.

Many conversations were had onlookers including women who knew this story far too intimately.  One man told us that when he sees prostitutes that they want to be there and are always smiling.  He started to see things differently when we explained that they are forced and threatened.  If they don't smile and do what they are told there will be consequences.

Overall the street drama impacted many and spread awareness about the harsh reality of human trafficking in a place where it commonly occurs.