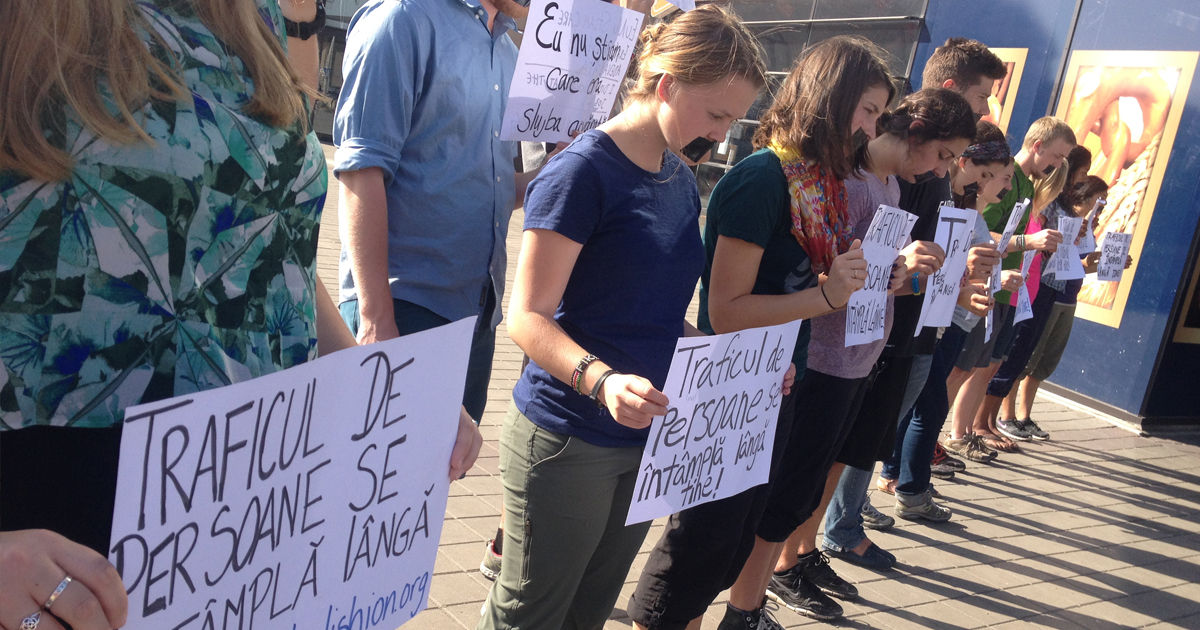 In the first two weeks of October, we had the Concordia University Around the World Team with us to fight human trafficking here in Romania.  This group was a team of 38, made up of students and their professors, Adam Lee, John Norton and Tim Preuss. This unique course sees students travel to ten different countries, over a six month period, to study culture, local literature as well as volunteering with local organisations on the ground.

A core group of six came to work with Abolishion.  During their time they learnt about human trafficking, particularly in a Romanian context, and had time to talk with professionals working in the area.  They assisted and participated in our professional training conferences for social workers.  The team also worked hard to create street theatre that they then performed, along with the rest of the team, on the streets of Oradea, Romania.

The street theatre started with a young girl being wooed by a young man.  He gives her flowers and then suddenly drags her, screaming, to a spot where she silently holds up a sign saying, “I thought he loved me.”  He then held up a sign, “I just wanted some easy money.”  Four other couples followed with screams grabbing the attention of the passing crowd.  When the drama was finished, the rest of the team, who were placed all around the plaza, held up signs with the words, “Human trafficking happens here."

It was a silent, solemn moment as the passer-bys understood what was being communicated. Trafficking happens right there in Oradea.  It is not a myth.  It doesn’t juts happen somewhere else.  It happens right here.  Traffickers promise the dream of a job or a boyfriend and then sell their prey into prostitution.  Many came up to ask for more information or simply to thank us for making this known. One girl wanted to write an article on what we were doing for her school newspaper. The local head of Missing Persons happened to see the drama and approached us to discuss how we can work together in the future.

With all that said and done, no one was more impacted than the Around the World team themselves. Performing the drama had caused them to think deeply about human trafficking and who is at risk. They suddenly saw that everyone, even people they cared about, were victims of this horrible crime. They vowed that they would not stay silent or ignorant about human trafficking anymore.